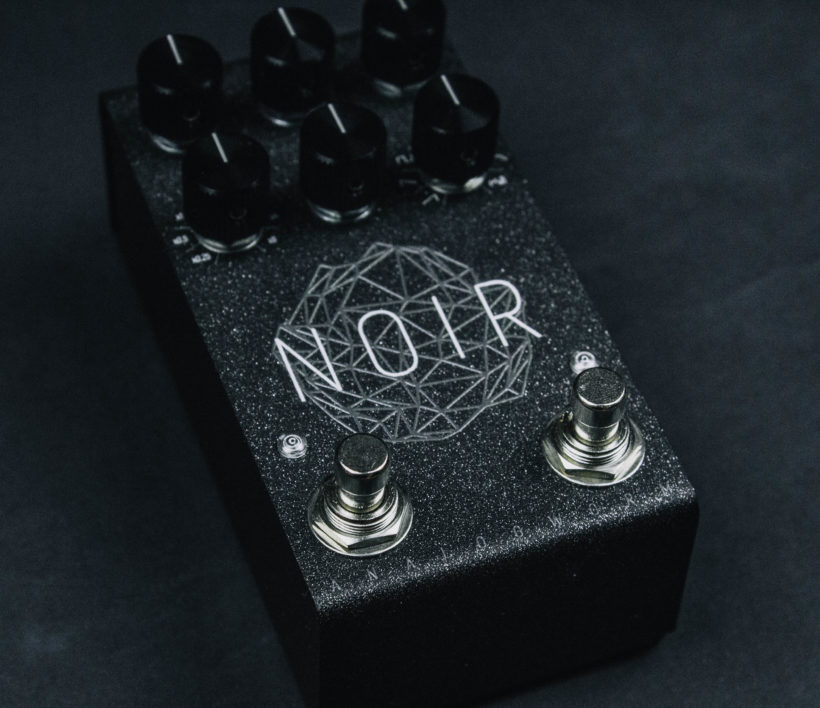 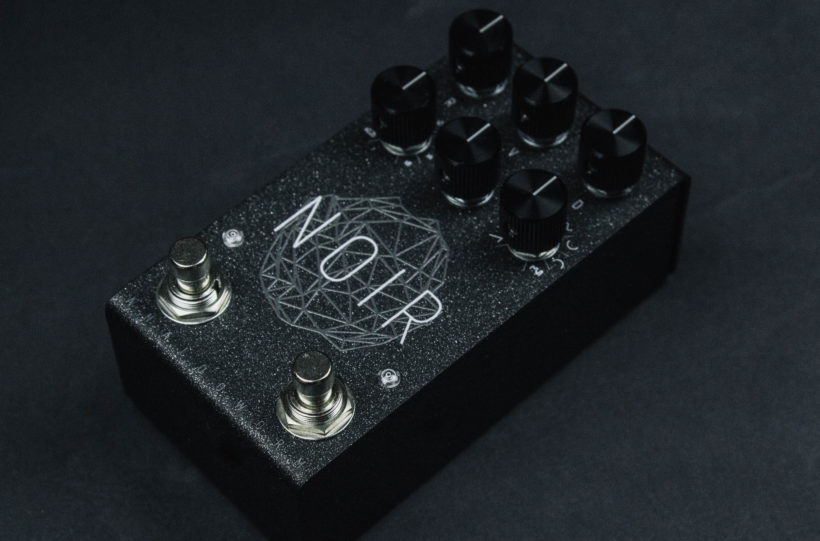 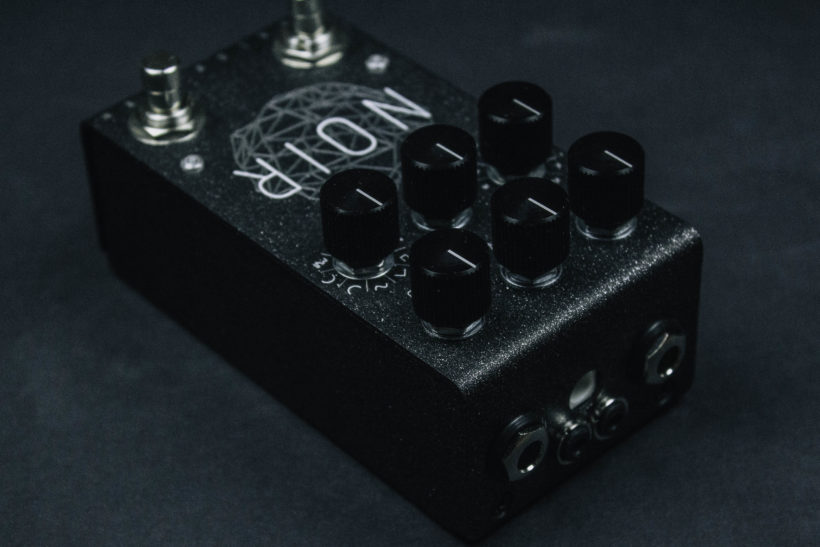 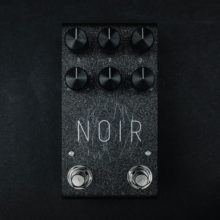 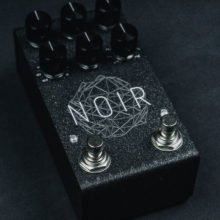 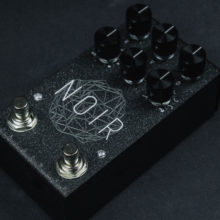 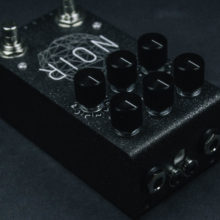 Noir is an amplitude/harmonic optical tap-tempo tremolo with all the modern features you could want in a small package. 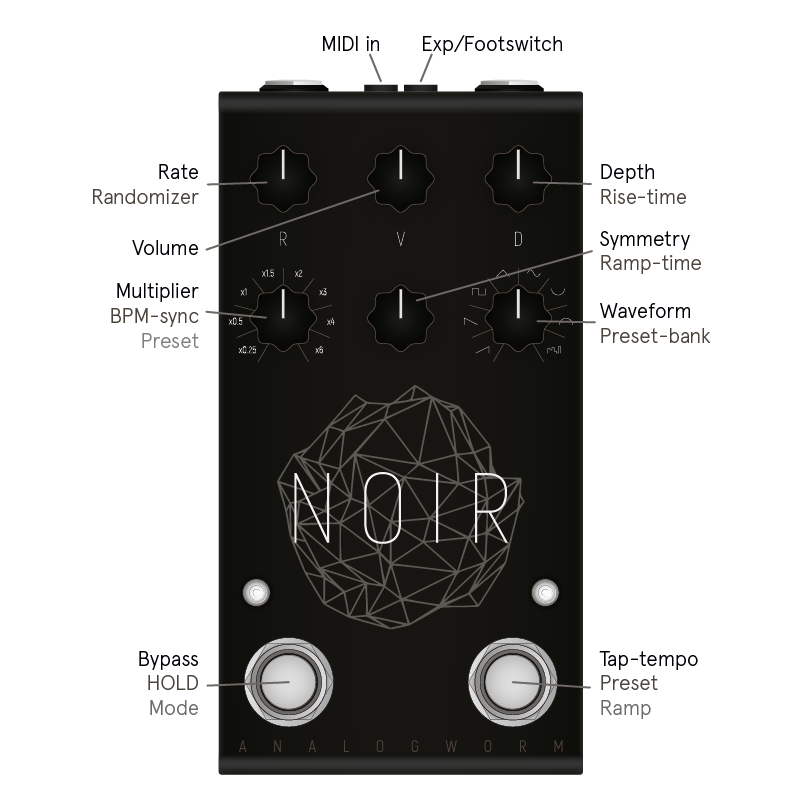 • Rate — Controls speed of the modulation.

• Volume – Controls the overall volume of the pedal. Left is less, right is more.

• Depth – The amount of tremolo effect applied to signal.

Depth Rise Time — Adjusts the time until the maximum effect depth is reached.

• Multiplier (BPM-sync, Preset)  – Wave rate multiplication knob. Also allows you to save and recall presets while tap-tempo switch is pressed down and set BPM sync while momentary HOLD.

• Tap-tempo (RAMP) – is used for tap-tempo with short clicks and speed ramping with long press. You can adjust ramping speed by turning symmetry knob while bypass switch is hold.

Noir has two banks of eight different waveforms. First bank is eight classic waveforms and second bank consists seven rhytmic patterns. Last wave in the second bank is random and can be controlled by MIDI, allowing you to build your own waveform.

Multiplier sets the ratio of foot taps to tremolo pulses. For example, at a x2 ratio, the tremolo will do eighth notes when you tap quarter notes.

In amplitude tremolo mode volume of our signal smoothly changing in accordance with LFO. In this mode bypass LED has a red color.

Harmonic tremolo mode is how the incoming audio signal is split in half into bass and treble frequencies. These paralleled parts are then modulated in different directions by LFO and then summed up resulting in nice vibe-like effect. In this mode bypass LED has a purple color. 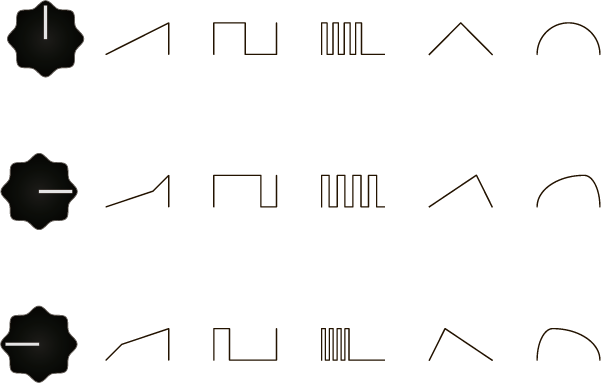 To save preset do the same things, but instead of releasing tap tempo footswitch, double click on bypass footswtich.

MIDI PC (0-15) will recall presets from 1 to 16. To save preset hold tap-tempo footswitch while sending PC message. 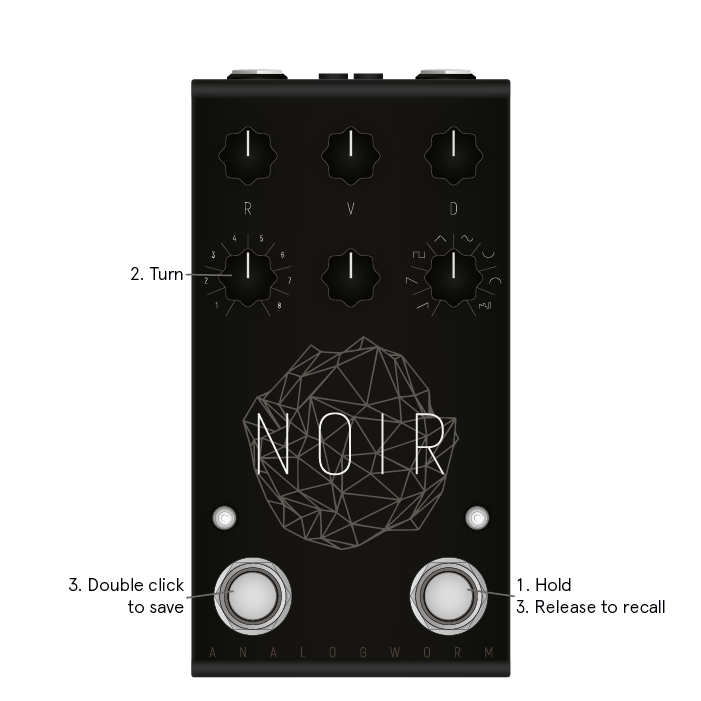 Depth, Symmetry and rate are controllable by the expression pedal. You can choose which one and in which direction will it work. To set it up turn the pedal off, set the required knob fully CCW to get inverted values, at noon to disable and CW to get normal values from expression pedal, then hold bypass footswitch and plug the power in. You’ll see blue led blink and expression parameters will be saved to internal memory. Both pedal controls and expression pedal can be used. Just turn the knobs or expression pedal to get data from it.

Expression input is the right small mini-jack combined input on the top of the pedal. You need stereo 3.5mm cable to plug expression pedal in.

If you do not use expression pedal, you should turn it of by selecting footswitch mode or it will get noise on its input.

Footswitch input is the right small mini-jack combined input on the top of the pedal. You need stereo 3.5mm cable to plug footswitch in.

Depth, Rate, Multiplier and Symmetry knobs has secondary controls. Long press, while the pedal is off, will activate momentary HOLD mode. Turn the knob, holding footswitch, and the led will blink, telling you that you are adjusting secondary parameter until you will release the footswitch.

• Rate has a secondary control for the Randomization. Adds fully random behaviour to the effect speed. Left is less, right is more, fully CCW is off position.

• Depth has a secondary control for the Rise-time. Adjusts the time until the maximum effect depth is reached. Left is faster, right is longer, fully CCW is off position.

MIDI input is the left small mini-jack on the top of the pedal. You need TRS midi type-A 3.5mm cable.

Select last waveform in the second bank and send any value from 0 to 127 to manually sculpt waveform.

Send any value on desired channel to select it. Pedal will blink blue when set.

Be the first to review “Noir mkII” Cancel reply